Warwickshire Umpires Make the Game
Following the appointment of Warwickshire’s Liz McIntyre as County Umpiring Representative, there has been a run of officiating courses throughout the county. A highly successful C award course in April was followed by two Beginner courses in Rugby and Leamington with a number of successful written and practical pre-assessments also taking place.
Liz herself has recently passed the ADL Tutor course and following the imminent completion of her co-delivered modules, she will be raring to deliver the range of officiating qualifications, including the Youth Umpire Award.

An enthusiastic Warwickshire Umpire’s Working Party has been established with representatives .from each of the county leagues and a highly beneficial Mentoring Day has also taken place to support the umpires from the Rugby Area Netball Association.

Congratulations to all involved and many thanks to Liz for her continuing hard work throughout the county.
Whistle Up Something Great: Meet Warwickshire's umpire Kelly Davis
Sarah Taylor, Warwickshire NDO recently caught up with Kelly Davis, one of Warwickshire’s leading umpires, to find out a little bit more about one of the faces behind England Netball’s ‘Find the Face’ campaign.

Could you give us a brief outline of your umpiring history?
Wanting to be a PE teacher, I went on a Coventry League UA course when I was 16, believing it would be beneficial for my career choice. I passed the UA test and in less than a year I had attended a C Course and became a C Award umpire at 17. Years of local league umpiring followed, along with umpiring for Warwickshire through all, of the age groups, up to Senior 2nds. I was selected to umpire in the Premier Division of the Coventry League and began travelling the region to umpire for teams in the national clubs leagues. I eventually passed my B Award in 2004. Upon the establishment of Regional Leagues I began regularly umpiring in the West and East Midlands Leagues, where I was Talent ID'd and selected to umpire a European Festival in Dublin. I finally passed my A Award in March 2011 and now regularly umpire in National Prem Leagues.

What are you umpiring goals?
To be the best umpire I can be and service the games I officiate effectively. Injury has hindered my development this season, so getting back to full fitness for the national Prem leagues is my main goal at the minute.

What would be your advice for aspiring young umpires?
Choose a knowledgeable mentor whom you trust and listen to their advice. Work hard and remember that being a good umpire is just as fulfilling as being a good player.

Finally, on a lighter note, do you have any embarrassing or memorable umpiring experiences you are happy to share???
In a recent match I umpired in Manchester between Tameside and Dominoes, during the pre-match preparation, Tracey Neville asked myself and my co-umpire if her and Karen Greig could use our chairs during the match. Being a bit star-struck, I was just about to agree when my co-umpire abruptly answered "No," and sent them on their way! No matter how far up the ladder you go and who's asking, the umpires' chairs are for the umpires only!! 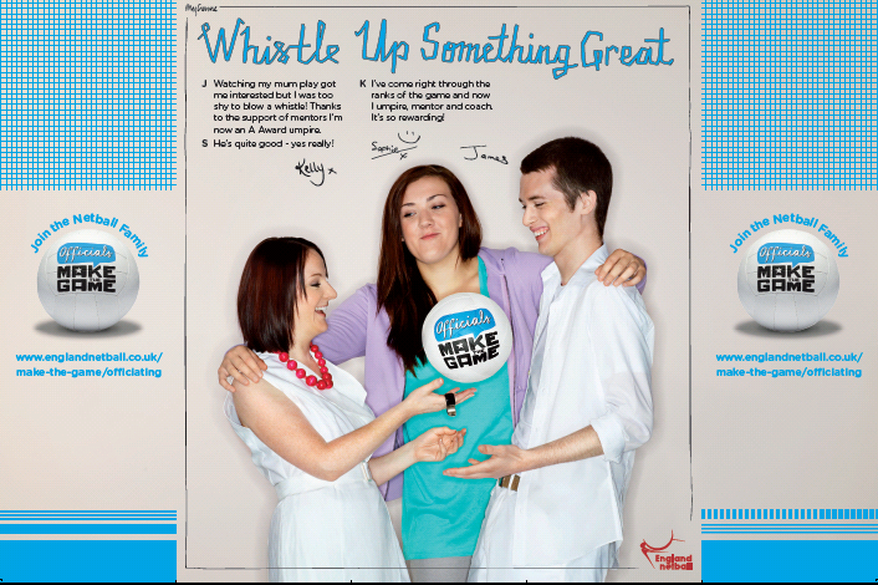