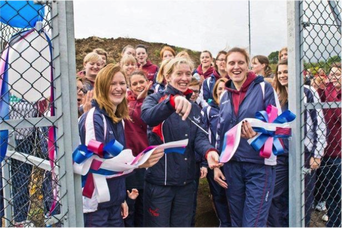 How do you go about sourcing funding your new ground?
The total cost of the project was £75,000. We set out initially to source grant funding for the entire project and spent many hours completing grant applications to highlight the positive impact and benefit of netball as a sport on the local community and women in general. We were successful initially with our application to Sport England claiming £50,000 through their ‘inspired facilities’ fund, our application was deemed one of the most comprehensive and inspirational they had ever seen! 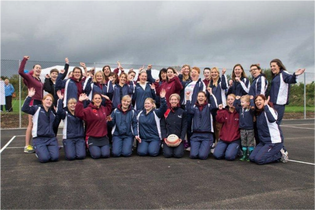 We were delighted to then secure further funding from the charity ‘Sported’ via their small grants fund albeit this increased our pot by only £2,000. We also recently received a £250 grant from the Lloyds Bank Community Fund.

The remaining £20,000+ was raised via club fundraising. All our members were incredibly instrumental in making this project a reality.

Did you raise any money yourselves?
As detailed above we raised £20,000+ ourselves. Fundraising played a major part in this, we held ‘ladies pamper nights’ took part in bag packing at local supermarkets and raised some funds via our annual Beth’s tournament held each summer in fond memory of one of our members whom sadly passed away a few years ago. Some of our members also took advantage of corporate fundraising donations available to them as employees of large organisations. The fundraising was a combined effort on behalf of all our members over a period of 3 years.

How many teams will benefit?
Our club now has 7 senior teams (in the Cov & Warwickshire league) and one in the recently established flexi league. We also have over 50 junior members who train on a weekly basis.

We now have a dedicated ground to host our games within the town that we represent! Our ground is second to none, designed and finished to England Netball Standards with fantastic non-slippy court surface!

Our courts have been in significant demand from other local clubs and are currently also used by Nuneaton Old Ed’s as their home ground for league matches (Coventry & Warwickshire League).

Local schools also use the courts for inter-school tournaments and games.

What difference will the new ground make?
Our new ground has made a significant impact to the club already;

This in itself has made a huge impact on team morale as well as the simple fact of having a ‘home base, that is ours!’

Our club costs have reduced whilst now not having to rent other courts.

The reliability of our games being played each week has increased due to the quality of the court surface- many a time our games have been cancelled because of slippy courts!

We have attracted a significant number of new players and we have been able to increase our commitment to developing netball and sport within the local community.

Finally we are also able to extend our commitment to netball throughout the year, and will for the first time this year continue training throughout the summer.

Anything else you would like to add?
Our success in raising the funds and in turn building and managing our own courts are a credit to all our members, their families our supporters and our local community also for supporting us. We have put in place a far reaching communications programme to try and raise the profile of what we have achieved which in turn ensures that netball as a sport gets significant coverage.

For information about hiring the courts please contact Carole Payne 07814 871529.